Go here to see a gallery of dogs who have found their forever home through us!

Sweetie, the young Boston Terrier with scoliosis, went to her forever home!

She was adopted by a very nice family and she is living it up, running around a huge yard and having a family of her very own who doesn’t mind her occasional incontinence issues nor her scoliosis! They’ve let us know how she’s been doing and they couldn’t be more in love with her. Congratulations, Sweetie!

Bruno does miss his playmate, though 😦

Bruno says, “I’ll just wait here until Sweetie gets back.”

Happy New Year to everyone! It’s been a busy time here!

Fred’s doing pretty well, but the poor guy has had a rough start to 2014. He visited the vet, whose actual words upon examining him were, “Aw, Freddie, you are a train wreck!” Poor guy. He was treated for a UTI; also, since his eye pressure was slightly elevated he was prescribed some medicine to help with that, with the caveat that if the intraocular pressure didn’t go down by the time he was re-checked, it might have to come out. Luckily, his eye pressure was much less after giving him medicine regularly.

However, it now seems that he may have an abscessed tooth, which presents a problem since he has a heart murmur and anesthesia is very, very risky for him.

The vet wanted to take some x-rays of his chest to evaluate what might be causing the murmur, so that should help. He’s also seeing an ophthalmologist, the same one that helped Kahlua when she had glaucoma, to see if Fred has any chance of getting some part of his sight back.

For now, Fred will continue to let me know whenever he hears anything I should be aware of: 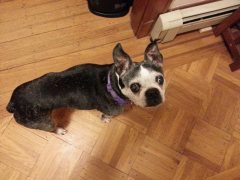 Tiny is a 12-year-old Boston with a sweet temperament who came to us because his owner became too sick to care for him anymore, so he came to us!

He was quickly snatched up by a veterinarian at Mass Veterinary Referral Hospital. Today, he’s doing great! 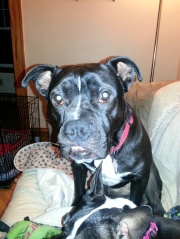 Bruno is a small 2-3 year-old pitbull mix that came to us from a South Carolina Boston Terrier rescue. Not much is known about him before he came to the rescue, but what is known is that he has bilateral hip dysplasia and had to have a femoral head ostectomy on his right hip and leg.

He will probably need surgery on his other hip at some point, we’re not sure when; but the good news is that the leg that was already operated on is getting stronger every day!

He’s fitting in really well so far with everyone else, and he’s an extremely sweet dog! We think someone will love him as much as we do. 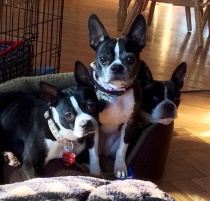 Sweetie lives up to her name – a true sweetie. She is a young 1-year-old Boston Terrier with scoliosis.

Despite having scoliosis, she doesn’t seem to be bothered by it at all; she and Bruno play all day, every day, even though she runs a bit funny and falls down a lot. When she does fall down on her butt, she gets right back up and gets right back to playing! She’s a little trooper!

Unfortunately, the scoliosis has left her without 100% control of her bladder, but she wears a diaper which she doesn’t seem to mind too much.

She’s a very sweet dog and we think that she will be great with some very patient and special adopters.

Bruno and Sweetie doing what they do… all day… every day.

If you (or anyone you know) are interested in finding out about any of these fosters, or any other dogs that the rescue has available, please go here.

EVEN OLDER UPDATES: See the archive.

Many of these dogs were surrendered by their last owner, found wandering the streets, or they were scheduled to be euthanized on the day that they’re rescued. Without rescues and fosters, these guys would never have had a chance – we’re glad to have helped them find their home.

More dogs will certainly be added to this gallery, so please check back often. Thanks for visiting!